Making a Case for Air Purification Systems in Retirement Communities 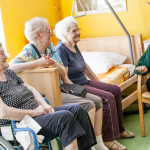 As people age, their immune and respiratory systems weaken and become more susceptible to illness. Airborne viruses and bacteria are a primary concern for seniors, therefore controlling them can reduce the chances of residents who live in retirement communities of becoming ill during flu season. The Toronto Public Health noted in their 2009 Influenza statistical Outbreaks reports that Long Term Care communities had represented 38% of the total enteric outbreak by risk setting, and one (1) out of every 33 seniors who contracted a communicable disease resulted in death.

In addition to flu-like illness, poor indoor air can also have other serious consequences on a Senior’s health. A 2008 study published in the American Journal of Respiratory and Critical Care Medicine and was the work of Dr Steffen Loft of the Institute of Public Health, Department of Environmental Health, Copenhagen, in Denmark, concluded the following: “Reduction of particle exposure by filtration of re-circulated indoor air for only 48 hours improved MVF (microvascular function) in healthy elderly citizens, suggesting that this may be a feasible way of reducing the risk of cardiovascular disease.”.

Scarborough Retirement Centre is a 130 resident boutique retirement community with 79 employees. The community experienced an Enteric Outbreak(1) of the etiological agent Noro virus like strain during the months of December 8th 2009 and was declared over by January 12th, 2010. During the 2009 Outbreak, restrictions were placed by the Public Health inspector on admission and re-admissions into Scarborough Retirement Centre. Forty-six of the 130 resident population and six staff members were at risk. As result of the outbreak(2), three suites became vacant and could not be leased to any new prospects calling to tour the community.

In October 2010, owner Marie-Josee Lafontaine researched for the best air purification system that would effectively manage airborne viruses during the four month flu season. Early December 2010, Surgically Clean Air units were purchased and strategically placed in the common areas located on two levels. Within 24 hours following the installation, residents noticed the difference, as such gave management a standing round of applause during resident council meeting. Executive Director, Debbie Casquenette has suffered from Asthma for the past 12 years. Previous to the Surgically Clean Air units being deployed, Debbie used an aerosol inhaler 4 to 5 times a day to assist with her breathing. After the Surgically Clean Air units were deployed, Debbie cut down her need for the inhaler by at least 75%.

During weekly management meetings, anecdotal evidence of the new air purification system was discussed to determine its effectiveness. Francis Luz, Manager of Health and Wellness observed a marked reduction of respiratory issues due to allergies and viral illnesses among her staff and residents. Ms. Luz who is also an allergy sufferer herself said, “I no longer take medication to calm down my symptoms when I am at work”.

Not only did residents who suffered from respiratory issues experience improvement, family visitors and prospects also commented on the “freshair-feeling” when they entered the lobby. During the winter months in 2011, Scarborough Retirement Centre experienced more traffic and increased occupancy as a result of competitive communities experiencing an outbreak.
Having an air purification system also became a compelling market differentiator. Maureen Scordamaglia, Community Relations Manager responsible for marketing Scarborough Retirement Centre found the selling point of clean air to be a plus. Visiting prospects were so impressed with the proactive stance with installing an air purification system that they asked “why don’t other communities have it as well?”

Ms. Lafontaine says that “purchasing Surgically Clean Air in Scarborough Retirement Centre was an important operational decision not only because it demonstrated how we took the health and wellness of our staff and residents to heart, but how it also made a difference to the bottom line”. With such positive results, the next step for Scarborough Retirement Centre is to place air purification units in each resident suite.

-Reduce likelihood of an enteric outbreak

-Save on chemical mists to cover odors

-Show your staff and residents that you care

1: Enteric Outbreak: The criteria for the Toronto Health Department to declare this community in an outbreak is if six residents ormore have contracted the virus. Control measures are established by the Outbreak Management team in consultation with theToronto Public Health.